In November 2020, I spent 30 days in Tanzania on a scouting mission for Global Shenanigans Expeditions. As well as climbing the mighty Mt. Kilimanjaro and spending over 14 days on safari, I was able to experience something truly unique and unforgettable. And that was the opportunity to spend a morning hunting with the Hadzabe Tribe and learn about their culture.

I’ve been incredibly fortunate to find myself in a number of ‘bucket list adventures’ around the world. I can now say, with confidence, that nothing compares to this. I have never been so captivated, fascinated and intrigued as when the Hadza people – Gem and his family – welcomed me to spend a morning with them.

It probably comes as no surprise that I spend a fair bit of time contemplating life and its intricacies. Thinking about how it works, how it once was and where it’s going, all whilst watching the stars or the waves crashing. By experiencing a way of life as raw as theirs, really stripped back to the essentials, you get a sense of how much more we could have, by having less. The modern world has become so unnecessarily complicated and stressful, with anxiety over the meaningless. There is a lot we could learn from the Hadza culture and a lot I will hold on to forever.

Below is my account from that day, taken from my journal notes. If you would like to embark on a similar trip, either hunting with the Hadzabe or in Tanzania as a whole, do get in touch! You can read more about Adventures Activities in Tanzania here. 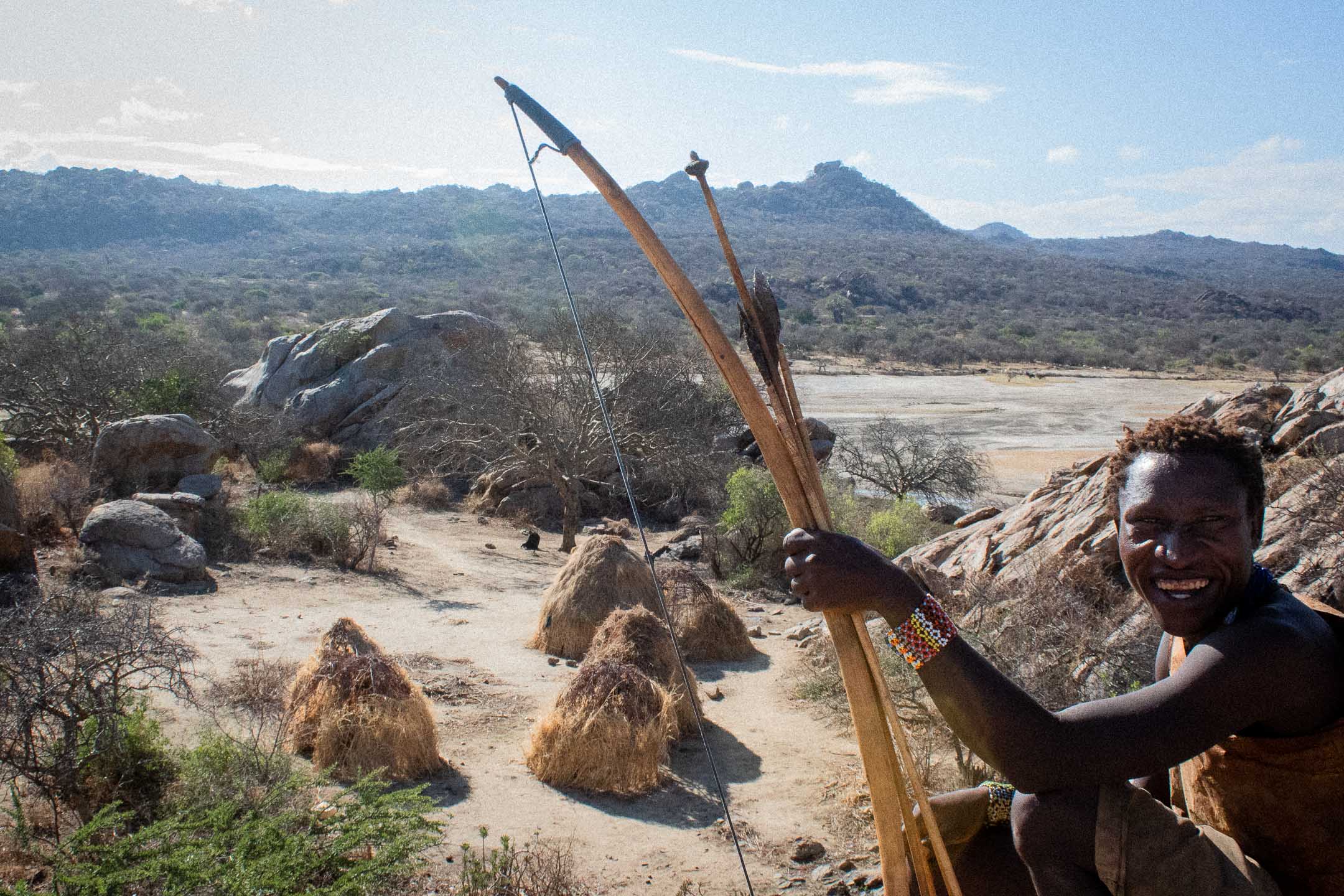 Hunting with the Hadzabe

05:10, time to get up. I groggily rose from the tent. No sign of anyone else. The night tends to amble on when you sit around the campfire watching the stars, even when you’re exhausted from multiple pre-dawn starts in a row. Eventually the others appear and quickly get ready. We need to leave early in order to reach the Hadzabe before they start the hunt.

The bushmen head out at sunrise to cover ground in the cool morning temperatures. Being a nomadic tribe living in their traditional way, they don’t carry cell phones. There is no way of letting them know we are coming or that they will even still be in the same place. Our guide, Rasuli, hadn’t visited for 10 days, so we really had to get there on time.

We bounced along pothole laden roads. They were more like a series of car sized gaps amongst the bushes than actual roads. I was riding shotgun and trying really hard not to throw the coffee into my face that I should have left back at camp. 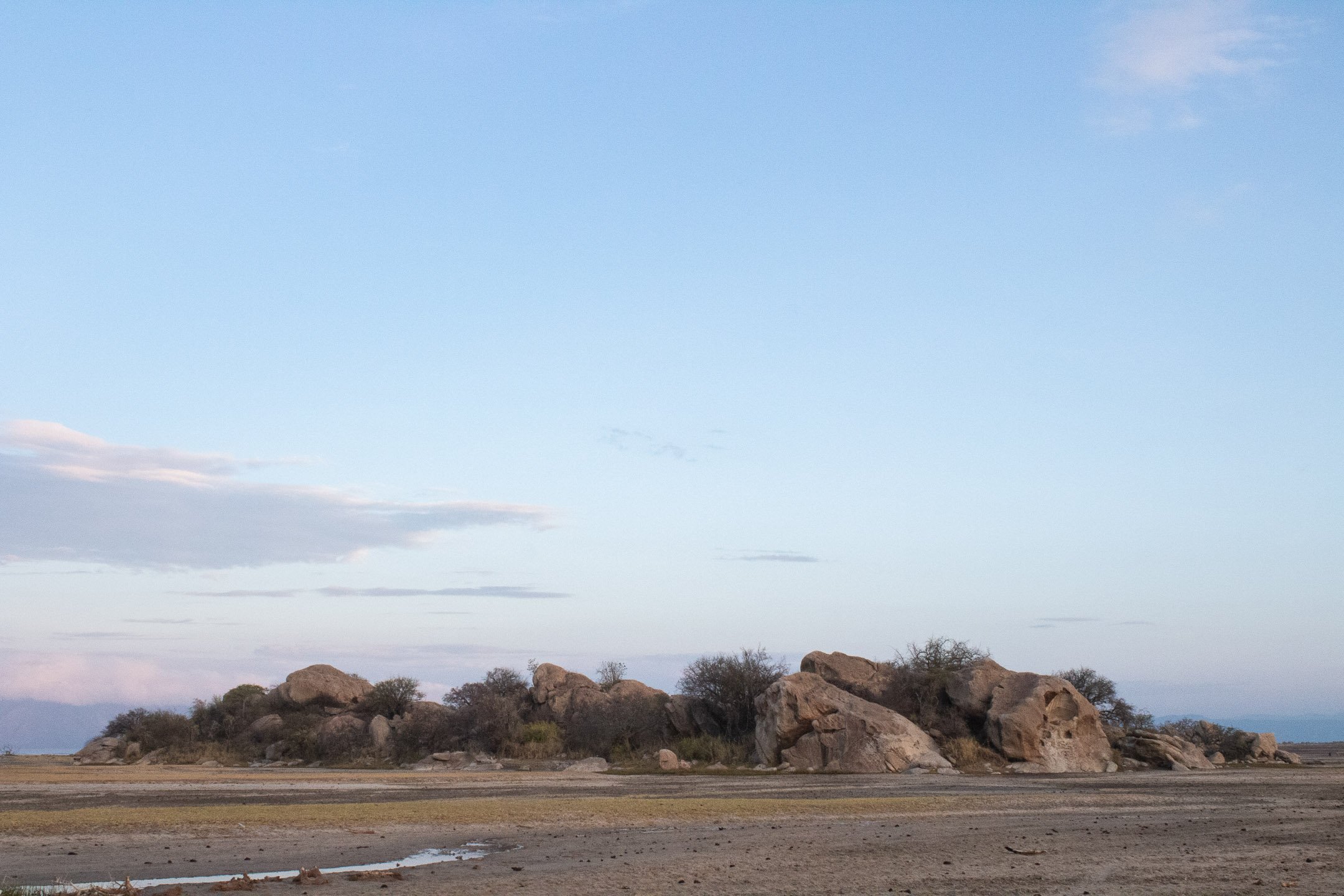 Pulling up to a large flat plain, Rasuli says this is where they are. Or where they were 10 days ago at least. We get out of the truck and start walking towards a cluster of kopjes in the centre of the plain. Rasuli whistles as we get closer to announce our presence. There didn’t appear to be any sign of life, but as we got nearer, there was a trodden path amongst the rocks. Weaving up the slope, we get to a clear flat section on the top of the hill with three small huts made of sticks and straw. A man pokes his head out and sees us. He dives back in, presumably to get dressed, and then stumbles out to speak with Rasuli. Rasuli is not Hadzabe, but he can speak the Hadzane language. It is one of the few languages that use a series of click sounds. It’s a wonderful language to listen to.

The man’s name is Gem (GUH-em) and he welcomes us to his encampment. As he greets us, a tiny yet vocal lady appears from another hut and begins berating Gem. This tiny angry lady is Gem’s mother, and she is telling him off for being late out of bed and missing the hunt with the rest of the men.

There are around 1200 Hadza people, with only 400 or so of those still exclusively foraging to survive. For the Hadza tribe, the men rise early and hunt for meat and game. The women forage for fruits, roots and vegetables, whilst the elders stay back and look after the younger children. Some families band together into larger encampments, whilst others join for hunting and food sharing. 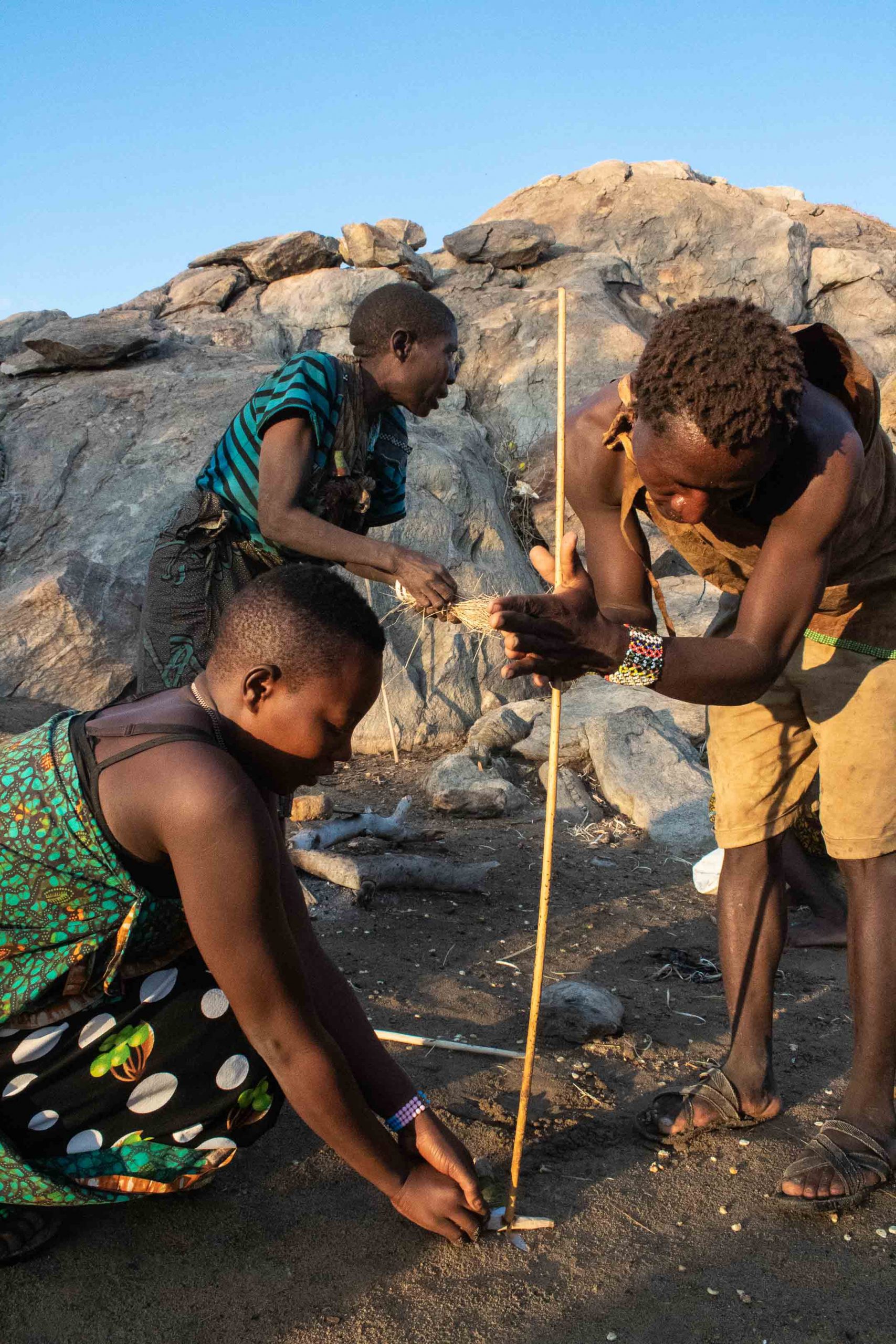 Gem had taken a lay-in and therefore missed the main hunting party. Bad news for Gem and his mother, but good news for us.

A lady comes out of the hut holding a baby and joins us. The first task of the day is getting a fire going using the traditional method of rubbing sticks. A longer pole is positioned on a flat block with a small notch in it. By running your hands down the pole, concentrating in the notch, embers are made which can then be transferred to a handful of dry grass. Once a flame catches, this is then moved to the kindling. The family had the fire going in under 3 minutes. I had a go and failed. They said the wood was a bit damp from the rain. I don’t remember it raining for at least 5 days and think they were just being polite. They wanted the fire going so the old lady could smoke her tobacco pipe. She lit up, took a huge inhale then coughed and sputtered for a few minutes. She seemed satisfied.

Gem began to prep his arrows for our hunt. He bit down the shaft to compress the wood and straighten them. There were different types of arrows for different prey. Sharp, poison arrows for big game and blunted arrows for the birds. He also had a club for collecting honey. 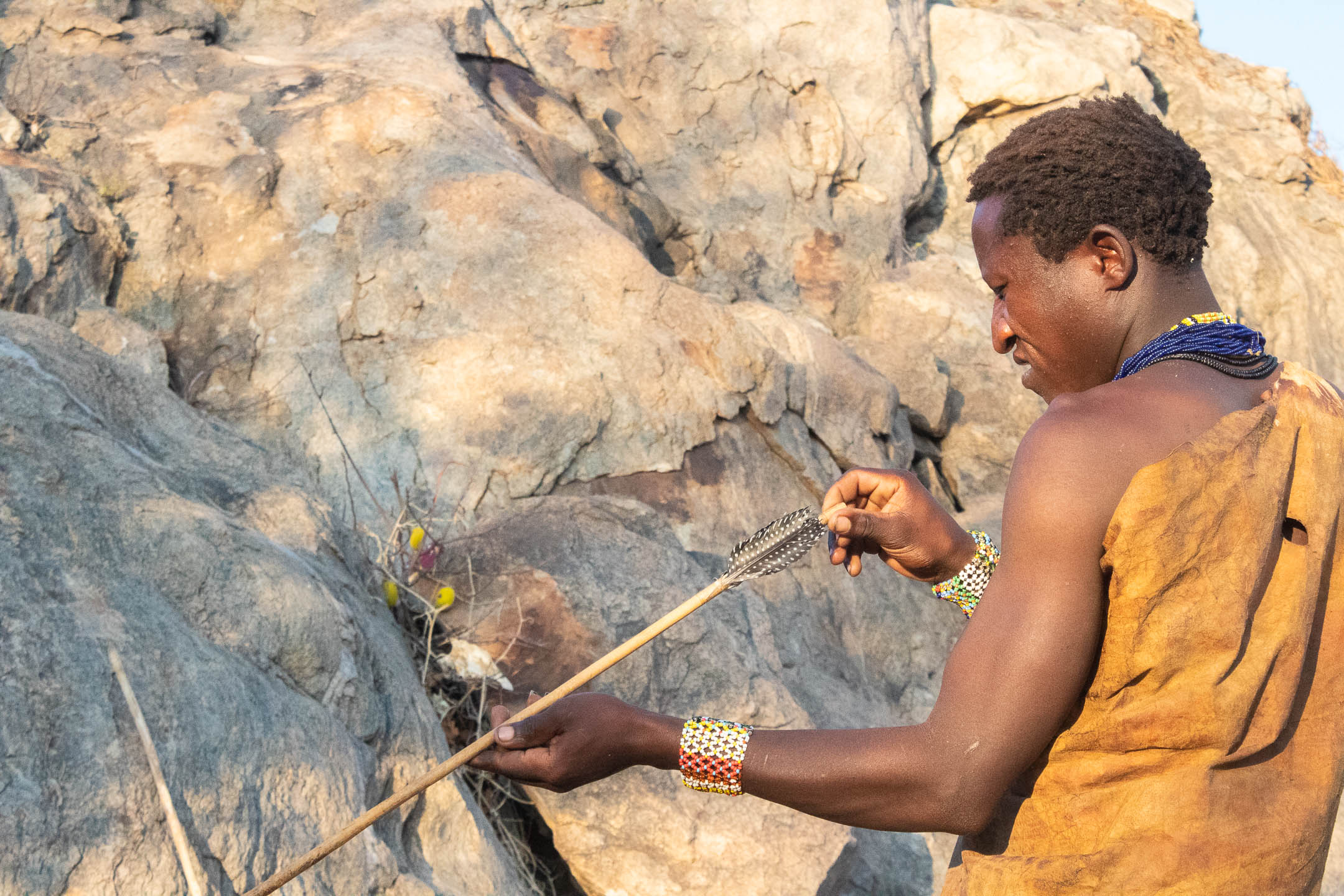 We left the camp with Gem and two younger women. Gem was moving fast through the bushes. His head pivoting left then right as he scanned for prey. He told us his favourite meal is baboon, but he’s happy to eat whatever he finds. You can’t be picky when you hunt to survive. He was looking for kudoo, porcupine, monkey, dik-dik or birds. 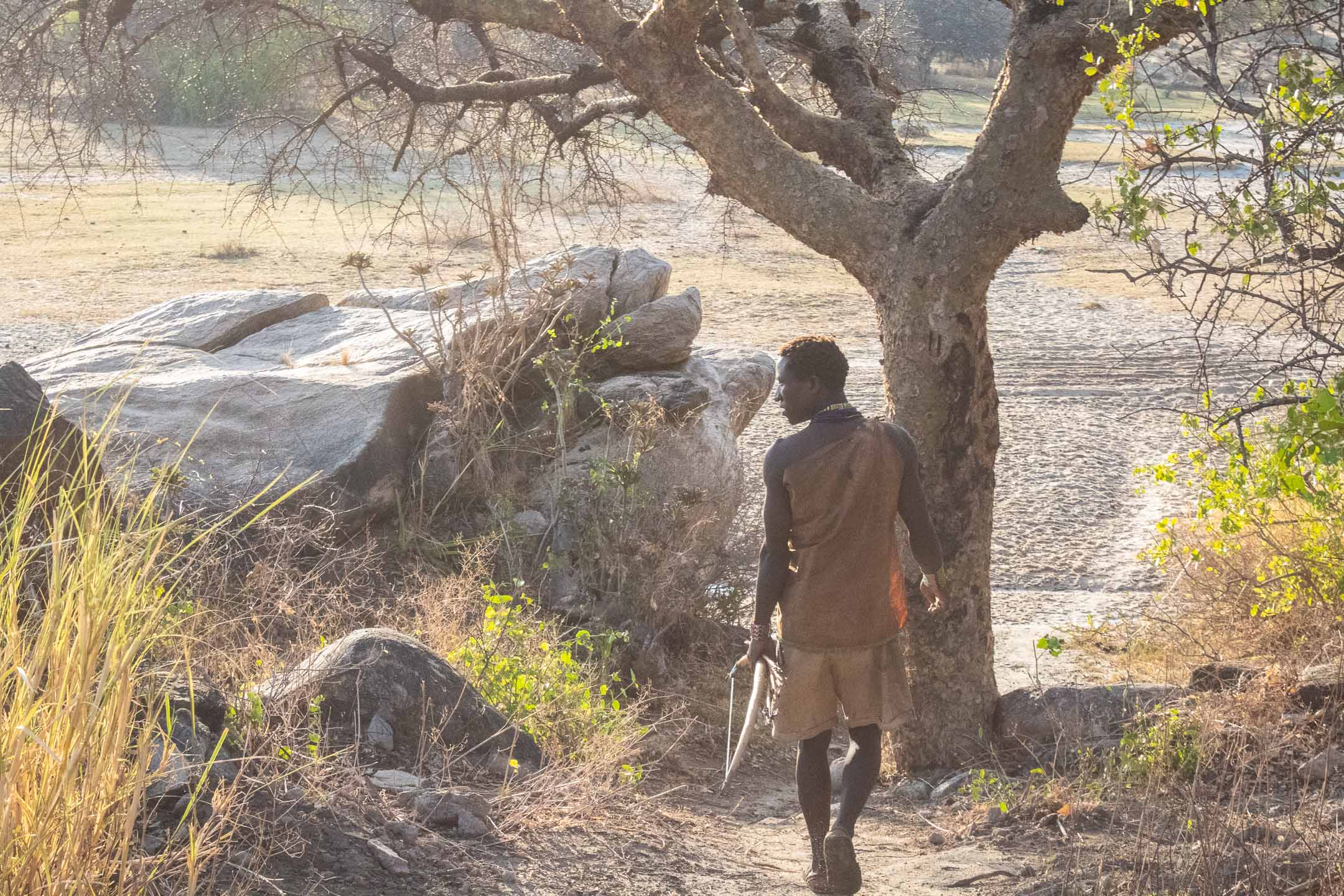 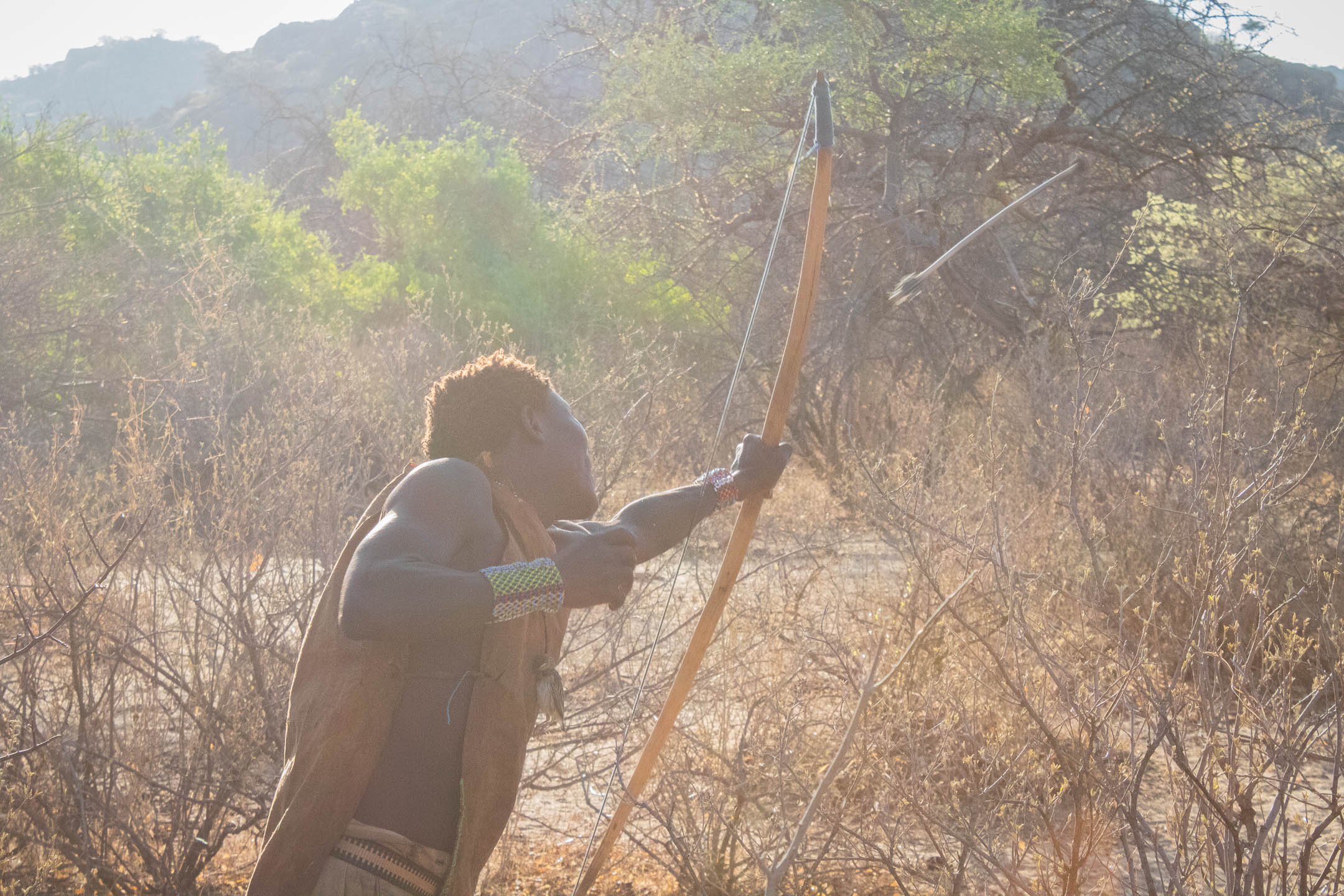 I was struggling to move at his pace. Weaving and winding between branches and bushes. Most of which had thorns on that would snatch at my clothing. I wanted to stay close so I could see what he saw, feel what he felt and experience this hunt as if my next meal depended on it too. I’d stay about 5 metres behind him as I was also conscious that my heavy footedness could scare away his next opportunity of a kill. Gem slowly raised his hand to gesture to stop. He’s eyeing up a cluster of birds in the tree ahead. I couldn’t see anything without my zoom lens. Slowly drawing back one of the blunted arrows, he takes aim and releases. Scurrying off into the bushes, he returns with his arrow and one snack-sized bird. Impeccable shooting. 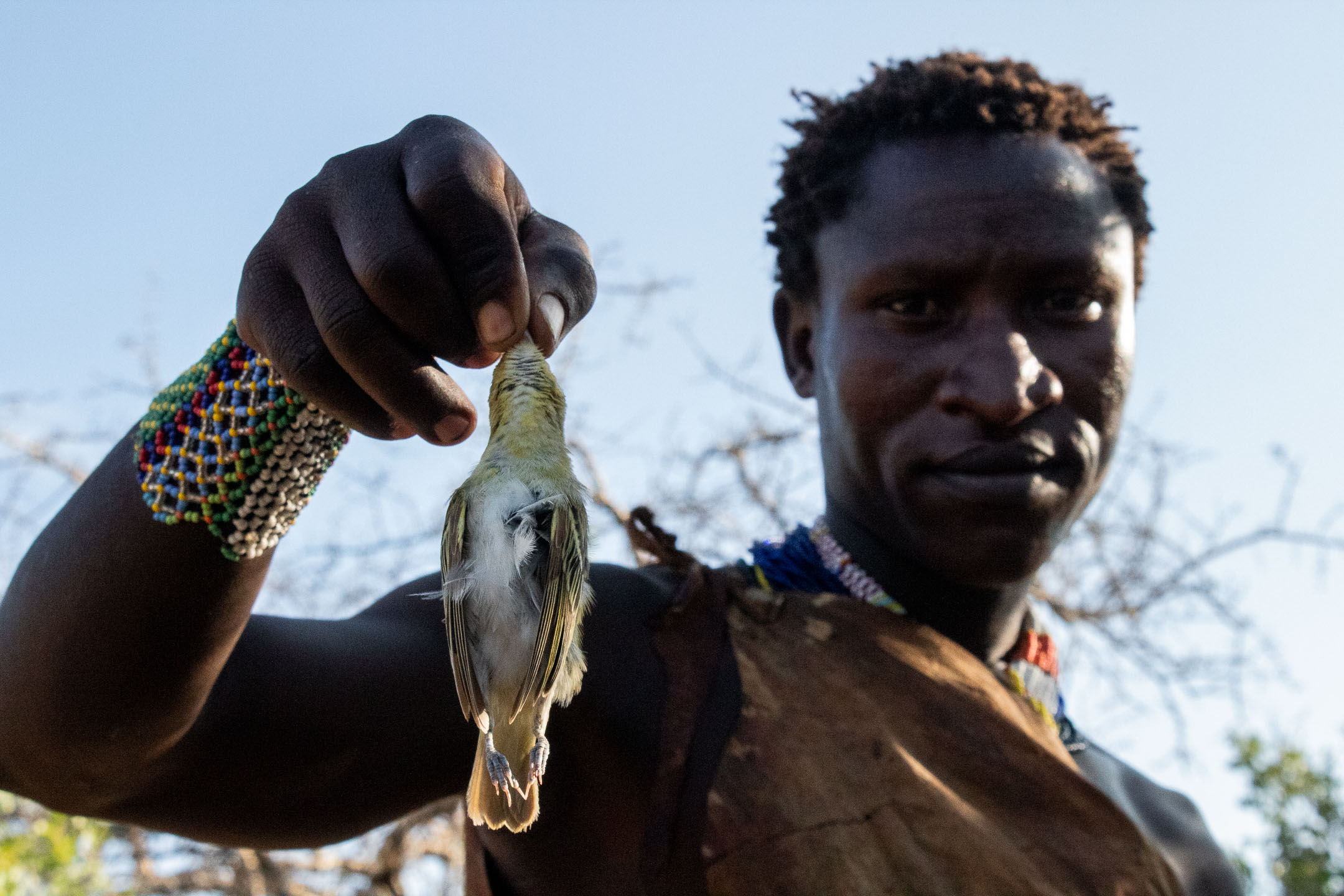 Whilst Gem continues hunting, the two women call us over to show us another method of finding food. They begin digging below one of the bushes. In just a minute or so, they have unearthed a sweet potato looking root, and plenty of them. They bag up the haul as Gem returns and proudly presents another bird. The birds are small, but will provide some protein for the family’s breakfast, as they wait for the main hunting party to return and share their spoils. 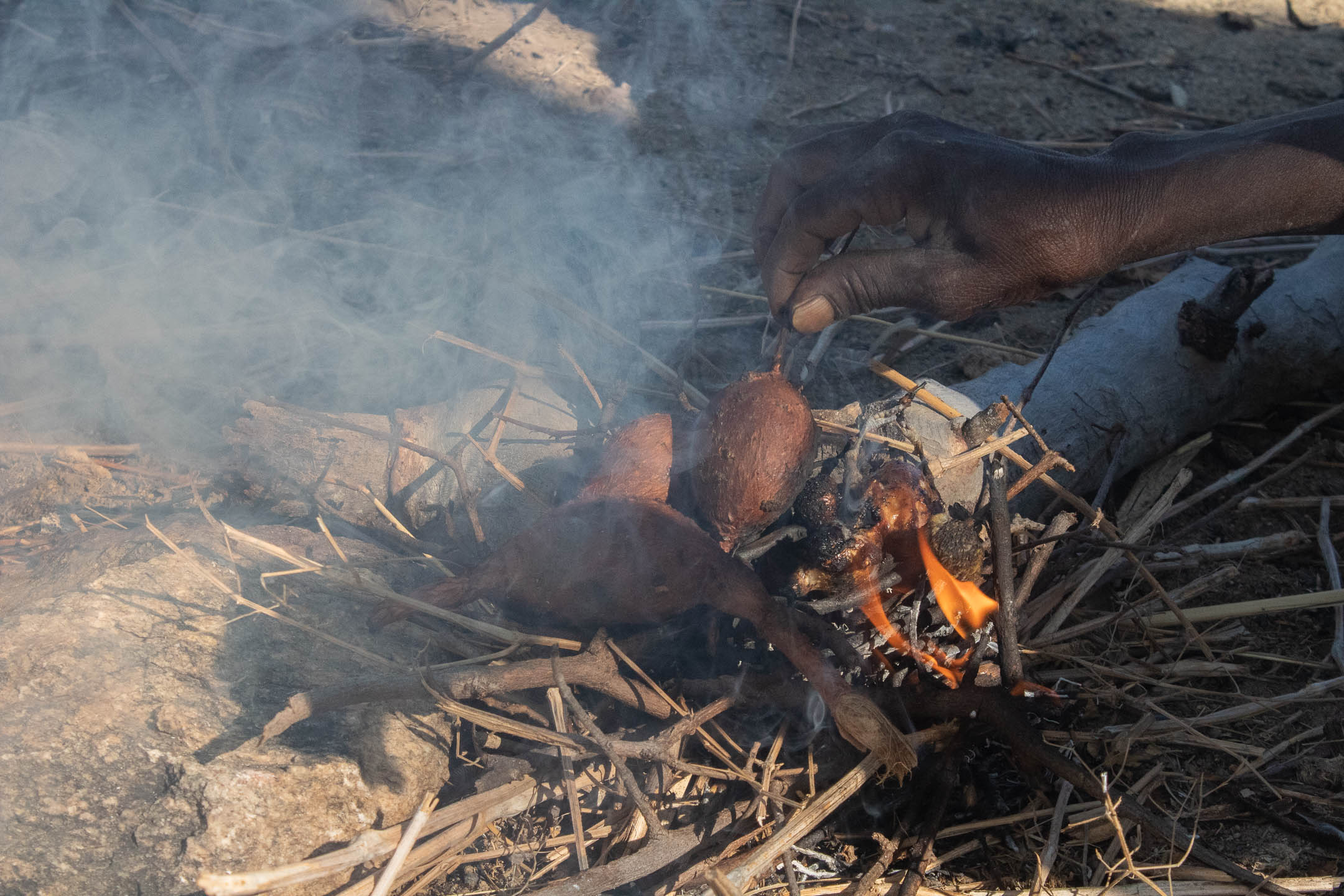 The Importance of Sustainable Tourism

Back at the encampment, sitting around the fire whilst the family tuck into their breakfast, my eyes have opened to another way of life. A traditional way. A way that all our ancestors once lived. With the help of Rasuli translating, Gem continues to explain their lifestyle and culture to me. For he is incredibly proud; happy to share and educate us.

At one point, my friend Thomas’ phone rings. He answers and walks away to take the call. Gem is beside himself laughing as this human is being controlled by a brick in his pocket. He makes a good point.

We as a society have strayed so far from what we once were. Our interconnectedness with nature is becoming more and more severed. The impact of modernisation is having catastrophic effects on the tribes of Tanzania, and many others around the world. For people such as the Hadzabe, their often difficult hunter / gatherer lifestyle is being made even harder by forces out of their control. Longer and harsher dry seasons make water scarce. Wild animal numbers have been in decline, and herdsmen moving into their territory shoo away what is left. 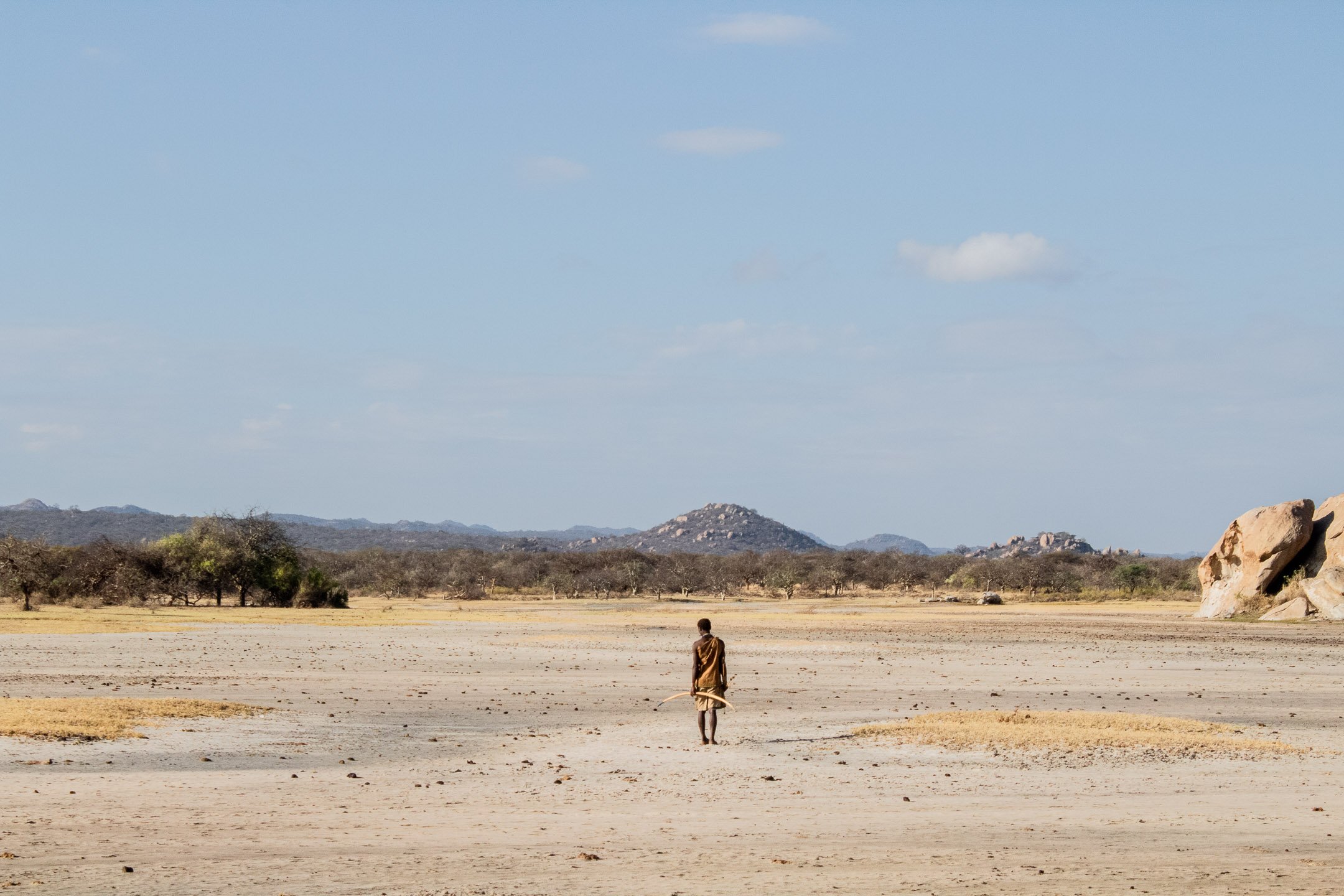 There is still hope. I believe it is possible for the Hadzabe to continue living in the way that they choose – not just to survive, but to thrive.

There are already steps being taken to protect them. The Government has given sections of land that they are able to live on, mostly to keep other people out. Non-profit organisatons are in the process of creating water towers that the tribes people can visit during the dry season, taking one more burden off their shoulders.

Finally, the impact of community focused, sustainable tourism may help to protect these proud people. As people become educated on the Hadzabe and other tribes, a stronger desire will come to provide support. A tourist tax on people visiting Lake Eyasi and cultural experiences such as the one I went on will generate money. Money to buy up and protect land, keeping herdsmen and their cattle away. Incentives for increasing wild animal numbers in the area back to levels held just one generation ago will further improve the Hadzabe quality of life, as they won’t have to travel as far to find a meal.

It is not a perfect system. I wish it could be as simple as ‘just leave them alone’, to let them live their lives without outside interference. But unfortunately we have passed that stage. Without outside help, I fear there may not be long left for these tribes. As generations pass, they will slowly be forced into the city in order to feed their families. For Gem at least, this is not a life he wants to live. This is a culture still connected to nature and we have a chance, together, to protect it. 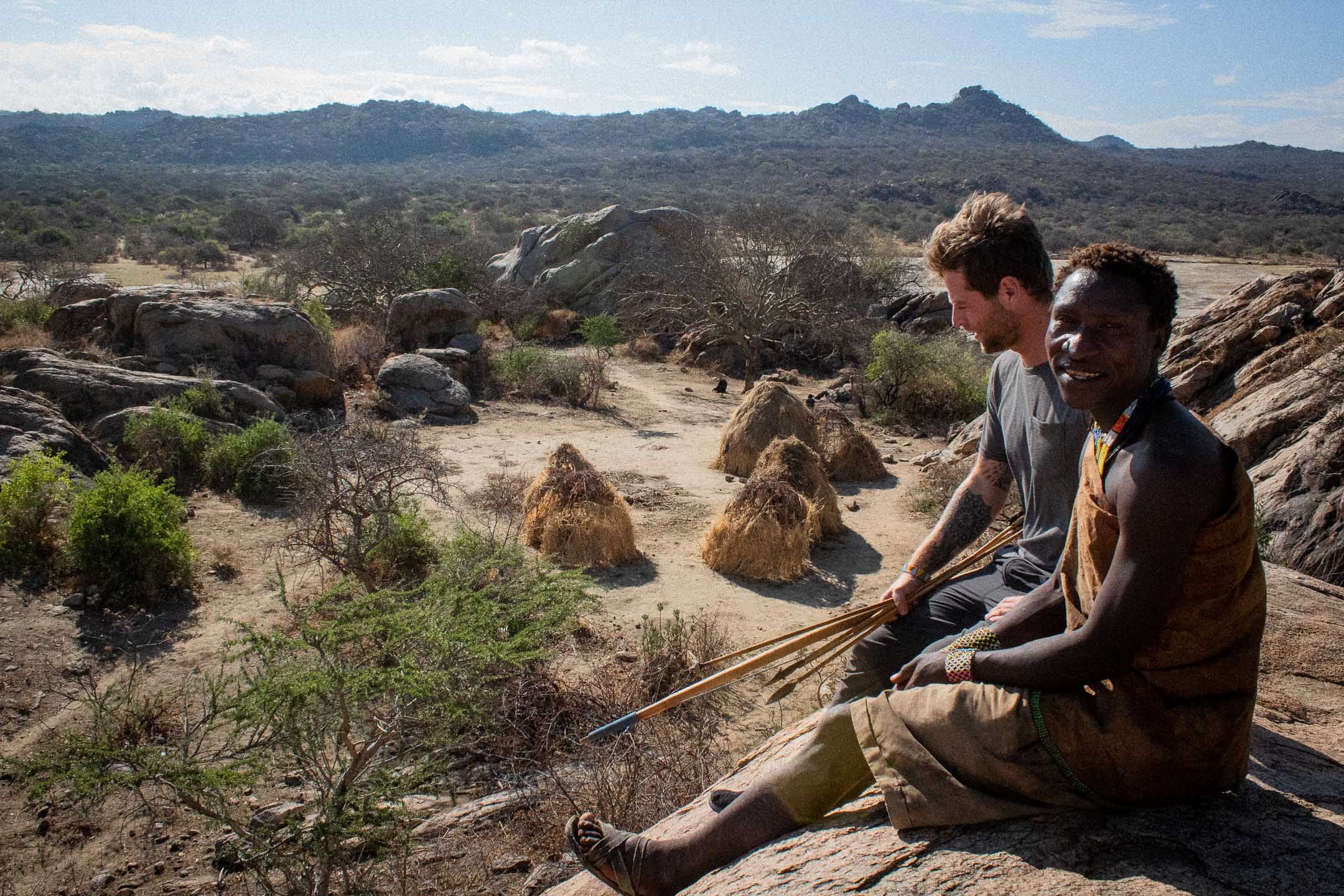